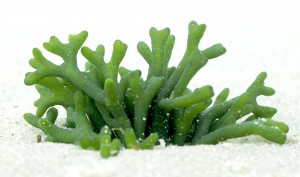 Algae: They have been around for 3 billion years, and there may be hundreds of thousands of species, many as yet undiscovered. By creating oxygen from CO2, they made animal life possible, and still provide 60% of the earth’s oxygen. Low on the food chain, they nourish trillions of beings, and yet they are far from simple. They are the most powerful organisms on our planet, they are found everywhere, and we have really only just begun to study them and to understand their vast potential.

Algae are used in ways that cannot be counted:

To harness the immense power of algae, we first have to recognize that these are complex little beings with complex social lives and complex life cycles, all of which we have just begun to study both in the lab and in the field. This is not a task to be mastered in a couple of years by fast, showy start-up companies; it involves patient research and development over many years and within an intricate web of scientific and industrial partnerships. Embodying a business ethic of humble hard work, careful investigation, solid evidence, and reliable productivity, Eldorado Biofuels is the pioneer in algae cultivation and the low-cost production of algal biomass for every use.